Whenever you buy a new camera lens, you’ll often receive a free lens hood included with your purchase. And while many photographers leave it on without thinking twice about what it does, this handy tool isn’t just for show.

Lens hoods can help you achieve the results you desire in your images by excluding unwanted glare and flare, and they’re also an essential tool if you want to avoid causing significant damage to your lens. But which situations are best to use your lens hood in, and when should you consider taking it off? Let’s find out.

What is a Camera Lens Hood?

A lens hood is an accessory that you attach to the front of your camera lens. While it is traditionally made of plastic or metal, you can also make one yourself using any light-blocking material.

You’ll typically find two types of lens hoods; petal lens hoods haven’t got corners, whereas tube ones are fully circular. The type of lens hood you use will depend largely on your camera’s sensor shape and the lens you connect to your camera.

Why Should You Use a Lens Hood?

One of the main intended benefits of a lens hood is to keep unwanted light out of their pictures by blocking light sources that would otherwise cause glare or lens flares.

The design of each lens hood is such that it will allow direct incoming light from within the lens’s angle of view while blocking out stray light rays from outside the angle of view.

Both petal and tube lens hoods do a solid (pun intended) job of stopping stray light from entering the lens, making it easier to capture your desired shot in conditions where you have to deal with excessive lighting.

In addition to its optic-related benefits, lens hoods are also commonly used as a way to protect a lens, both from damage as well as from the elements. Lens hoods can help protect your lens from sustaining damage that stops it from working properly, such as cracked glass.

Your lens hood is probably the first thing that will hit the ground if you drop your camera; even if it breaks, replacing the hood is much less expensive than repairing or replacing a lens. It can also, along with a lens filter, protect the front glass element of your lens from scrapes and cracks if the lens accidentally swings and collides with something head-on.

You can also use your lens hood to take better photos in bad weather. Keeping the cover on your camera will make it harder for precipitation to get into the lens, allowing you to focus on capturing your desired shot instead.

When Should You Use a Lens Hood?

So far in this article, you’ve learned the basics of a lens hood and why you should consider using one. To help you use yours more efficiently, it’s worth considering the different scenarios where having one will benefit you.

When You Want Contrast in Your Images

If you’ve ever photographed on a sunny day before, you’ll know that creating images with contrast is sometimes tricky.

Keeping your lens hood on will enable you to avoid losing contrast, meaning that you only need to make tweaks during the post-production phase – as opposed to more drastic edits due to unfavorable light hitting the lens.

In Conditions with Many Light Sources

Photography is largely about lighting, but too many sources of light can make it difficult to shoot without unwanted light leaking into your images. Regardless of how good your composition was, perfectly fixing a photo with light issues in post-production can be difficult if not impossible.

In Rough and Rugged Locations

The stunning natural landscapes of countries like Norway and Iceland make them destinations for photographers. However, you might sometimes find yourself in parts of those (and similar) places in which dropping your camera or bumping it into things like rocks is a risk. 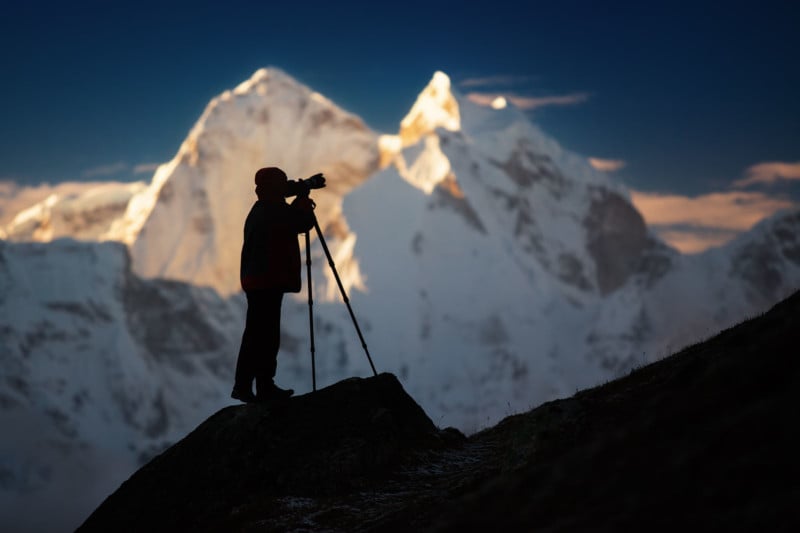 If you’re worried about dropping your camera, your lens hood can at least provide a little protection. Examples of scenarios where you might want to consider using one for protective purposes include hiking on rocky terrains, when you’re out and about in a city, and when photographing indoors on hard (and potentially slippery) floors.

You should, of course, also consider getting a robust and secure strap to secure your camera better.

When Shouldn’t You Use a Lens Hood?

Despite the many benefits of using lens hoods, you’ll want to think twice about using one in certain situations.

Photographing in windy weather is a challenge for even the most experienced photographers. Camera lens hoods can sometimes act as a sail during high winds, resulting in camera shake and blurry images. Or worse, they could cause your tripod-mounted camera to topple over.

Taking the cap off can be a good idea if you’re using a slower shutter speed and more of a telescopic lens. If your pictures are still blurry after doing so, you can always stabilize your camera with a sturdy (possibly weighted) tripod or another flat surface.

While using a lens hood can help keep water away from the glass, you should also remember that their main job is to reduce the amount of light coming into the lens. Lighting levels are naturally lower during overcast weather, and lens flare isn’t as much of an issue.

If you’re photographing in cloudy weather and it’s not raining, you can consider leaving your lens hood off. You can keep it in your bag in case conditions change later.

When You Want Lens Flare in Your Images

Sometimes, lens flare can help improve the look and feel of a photo. Think about golden hour, when you can see the sun’s shining rays in your picture, for example.

If you want lens flare in your photos, using a hood can get in the way of your creative vision; detach it and start shooting.

How to Buy a Lens Hood

If you do not already have an included lens hood with your lens and are looking to buy one, it is important to find a correct, compatible lens hood for your particular lens model.

Typing the model name of your lens with the words “lens hood” in a search engine or camera store website should bring up the exact lens hoods that work for you. You will want to double-check in the description to make sure the lens hood is in fact designed for your particular lens — as stated earlier, lens hoods are designed specifically for a lens’s angle of view, so getting the wrong lens hood can result in issues with your final images.

How Do You Use a Lens Hood?

Using a lens hood is straightforward, regardless of whether you have a petal or tube version. All you need to do is put it on the front of your camera lens and rotate it until you hear a clicking sound or until it comes to a stop and cannot rotate any further.

There will usually be indication markings on both your lens barrel and the lens hood to show where the two should be aligned prior to rotation.

Some lens hoods come with locking that use screws or other features to prevent the lens hood from accidentally getting detached from the lens, while others are simply kept in place with good old friction mechanisms.

Try moving the lens hood to see it fall off easily, which means it wasn’t mounted correctly; If it doesn’t, you’re ready to head out with your camera.

How Do You Store a Lens Hood?

In addition to removing a lens hood and storing it in your camera bag, most modern lens hoods can be mounted in reverse on the lens when they are not needed. Simply put your hood on the front of your lens backward and rotate it, as usual, to lock it in place with its hood portion covering the barrel of the lens instead of extending outward.

Lens Hoods Are More Useful Than You Might Think

So, there you have it – now you know what a lens hood is, and you’re also ready to start using one correctly. More often than not, having one on your camera will help you get the pictures you want and also reduce the risk of damage to your equipment.

While lens hoods work for most photographers, others prefer to leave theirs at home. Experiment with both to figure out which approach is better for you.